A few questions, as I'm considering having a factory hard top made for my 3500 Open.

So you had a canvas top before, correct?

How difficult was the install? Can you describe the steps in general ... wiring, support posts, etc. ?

I don't see any eisenglass fillers between your windows and your new hard top.  Do you have those?

Lastly, are those hatches or sunroofs that I see on the new top? 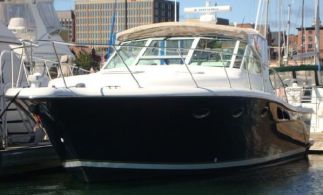 Yes, I had a canvas before.  Once the top went on none of it could be reused.  Here is a photo of the old canvas followed by one of the new canvas.   The new canvas dramatically increased the feeling of space inside the helm area.   You can see how much further aft it goes.

For the new canvas, I have something similar to EZ2CY running around the sides and front.  Harder than strataglass.   The sides unzip and can fold inward, which I do quite a lot as it brings the breeze through.

I thought the installation of the top was remarkably easy.

Hardtop arriving on the truck:

Hardtop on block thanks to the yard guys:

I drilled a hole to align with a matching hole I drilled on the radar arch.  Aft of that hole you can see the anchor light threaded holes and wiring:

I drilled out holes for the radar on the hardtop and the arch using a drill jig I made for my Furuno radar.  If this is of use to anyone else I can send it to them.

I then polished the gasketing surfaces:

I temporarily attached the Tiara support strut to the windshield using the hardware they provided.  I then ran a horiztontal 2x4 from the top of the arch to the top of the Tiara strut.  I then bolted a vertical 2x4 to the OUTSIDE of the windshield frame (photo shows inside but that is WRONG--It needs to go on the outside to grip the non-skid).   I marked the vertical 2x4 at the bottom of the horizontal 2x4 and cut it about 2" higher than that in order to support the hardtop.

Now the boat is ready for the top with the 2x4 supports in place on the OUTSIDE (and the Tiara support struts temporarily removed):

Hardtop on the Travelift.  I dropped a 6" long 1" diameter bolt and washer through the alignment hole I drilled in the hardtop before it got hoisted into the air:

From there, the yard lifted the top onto the boat and lowered it on the arch and wooden 2x4 supports.  I would not have done this on a windy day!!

During the process, I had a couple guys help to nudge the top so the bolt would drop through the matching hole in the arch, and after threading on the nut I stood on the bow and they adjusted the twist before the final drop onto the wooden 2x4 supports.

Next I permanently installed the Tiara struts.   I used another drill jig to drill the pilot holes for the screws.  Here, the windshield is in the way so you need a flex shaft for your drill bit and the drill jig helps.  One small annoyance:  Tiara made the base of the struts with irregular hole spacing.  As a result, I had to make drill jigs for the port and stbd, and they would not work for anyone else.  But you could probably drill the holes another way.  Clean up with acetone, and bed it with 3M 5200.

I cannot add more photos to this post so I'll show the drill jig in another picture.

Here is the drill jig for the Tiara support struts.  I wanted the screws to go in perfectly straight, hence the jig so I could drill the pilot holes straight so close to the windshield.

Oh, I forgot to mention that disconnecting the radar wiring and then reconnecting it was probably the most annoying part of the install.   There were something like 40 colored wires inside the radar that I had to keep track of.   I removed my radar after making sure I could reconnect the wires, and tucked the wires inside the arch until the top was on.  Then, when the top was on I reinstalled the radar using longer 316 bolts than had been there.   Used silicone paste between the rubber gasket and the hardtop.

Other wiring was pretty easy.  There is already wiring there (hanging out in the sternshot photo below) for the anchor light, so you just cut that and connect it to the light they give you.  The pull string was still in my arch, and I was able to use this to pull up wiring for the LEDs and to install two additional, rear-facing LEDs in the arch for a total of 5 total LEDs in the top.  I'm very glad about the rear facing LEDs and highly recommend them.

I'm impressed by your workmanship, but also by what (apparently) comes from Tiara with the top.  It seems as though they sent just what you needed in the way of custom materials, struts, parts, etc. to make the project a success.

Thanks for taking time to share the fruits of your labors with us.  If I decide to tackle this project, it will likely be next fall.

Any comments on the ordering process? Timeline? How it was to work with the factory?

Author's Statistic:
Posts: 71
Threads: 2
Likes Given: 2
Likes Received: 5 in 4 posts
Joined: Mar 2013
Posts: 71
Threads: 2
Likes Given: 2
Likes Received: 5 in 4 posts
Joined: Mar 2013
#6
01-18-2015, 08:37 PM
Thanks for the kind words.  My boat is a 1990.  Tiara was a pleasure to work with. They told me when the top would ship and delivered as promised, exactly on schedule.  Gave me lots of information to help me decide and plan. They view the top as a "kit".  Every last screw needed for the install was included.  They don't include instructions, but on the phone told me how to do it and that is what I have shown.  At the time my contact was Evan, who is no longer with the company, but I expect that whomever is in charge of this program will also give you all the advice you need.  If you do this, I am willing to help you in any way I can.

Thanks.  In reading over I realize I forgot to mention how I removed the 2x4 vertical supports.  After installing the Tiara support struts with 5200 and screws onto the fiberglass ledge on the inside of the windshield, and checking to make sure the thru-bolt holding those same supports to the windshield was secured well into the windshield, I lifted the corner of the hardtop, removed the 2x4, and lowered it onto the Tiara support strut.  It was possible to do this without any help. I did the same for the other side.  Then, I drilled and thru-bolted the struts to the hardtop using Tiara's oversized washers and sealant on the top surface.

Thanks.  In reading over I realize I forgot to mention how I removed the 2x4 vertical supports.  After installing the Tiara support struts with 5200 and screws onto the fiberglass ledge on the inside of the windshield, and checking to make sure the thru-bolt holding those same supports to the windshield was secured well into the windshield, I lifted the corner of the hardtop, removed the 2x4, and lowered it onto the Tiara support strut.  It was possible to do this without any help. I did the same for the other side.  Then, I drilled and thru-bolted the struts to the hardtop using Tiara's oversized washers and sealant on the top surface.

You are one handy guy!!  That is a project that I NEVER would have undertook myself.  Again, Well Done